Diary of a Fly Girl 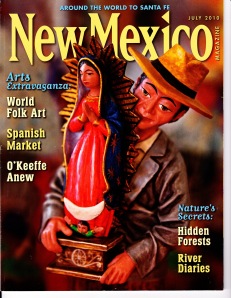 Lured by the rushing waters of the Pecos River, one novice woman experiences the Zen of fly-fishing in the high desert

The sun reflects off a swift riffle across the water and highlights a lone figure effortlessly unfurling line with graceful movements of the arm. A dance set to the rhythm of the river, the yellow line spirals, ripples and arcs through the air in its maneuvers to the perfect spot.

The serenity, peace and beauty portrayed by romantic images of fly fishing — is any of this for real? I’ve always wanted to find out.

Forecasted 40 degree temperatures and 40 percent chance of precipitation on the Pecos River threaten my late summer adventure. My guide and instructor Jarrett Sasser is not deterred. “Unless the river blows out, we fish,” he says, his fishing jargon describing a fast, muddy river fed by downpours. My visions of serenity start to fade. 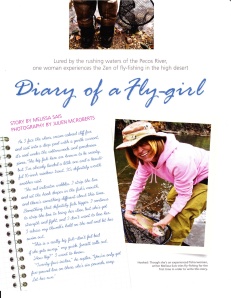 I meet Jarrett, owner of Santa Fe’s High Desert Angler, at a gas station at the mouth of Pecos Canyon. “Welcome to my office,” he says as we climb into his white 1996 Ford Bronco. Everything has its place in this dusty tackle box on wheels. A collection of flies hangs from the driver’s side sun visor. The rod I’ll use rides outside, attached in some way to the hood and the roof. The back is tightly packed with gear. Bouncing and winding up the canyon in this truck, I feel like I’m on my way to catch some fish.

Fifteen miles up into the alpine canyon once mined for precious metals and a treasure of timber for early settlers, Jarrett unlocks a gate and pulls into a private ranch where he’s leased its stretch of the Pecos for fishing. I pull on my hip waders with the neoprene booties attached and slip my now-waterproof feet into the wading boots. The sun shines and the sky’s a brilliant blue. The forecast was wrong.

Still on dry land, Jarrett hands me the rod. The flies are basically weightless, so I’ll launch the line down river with a rainbow-shaped arc to stretch it and feed it out of the reel. The next step is to lift the rod tip to put tension between the river and the rod. At the same time I look at where I’m attempting to cast, rotate my wrist but keep it straight and send my line to the spot. We spend about five minutes on this, and he calls it good. I hope for the best.

Jarrett ties a midge and a stone fly to my line with knots full of twists and turns. The stone fly will float on top and the midge will hang down in the water, attracting fish feeding on the surface and down below. He also attaches an indicator, a small, red plastic bubble that will show even a nudge from a fish.

We follow a wet trail down to the bank and cross the 15-foot span of water. There’s not much strength to the current, but the rocky bottom puts me off-balance. Jarrett explains that the fish face up stream to let the current carry water through their gills and food to their mouths. I’ll use the current to float my flies to where the fish are waiting. I stand in the river, get the line stretched out to my left and cast into the current several times to get to the right spot.

The indicator wobbles. Jarrett calls out instructions, “Strip the line and set the hook,” meaning pull the line in front of the reel down to take up slack while pulling the tip of rod up and downstream to set the hook firmly in the fish’s mouth. He’s on there. I strip the line to bring him close and Jarrett nets him – all six inches of him. My smile doesn’t stop.

“Let’s see what he’s been eating,” Jarrett says as he uses what looks like a miniature turkey baster to pump my fish’s stomach. There’s caddis from yesterday’s hatch, but not much yet this morning. We let him go. All of Jarrett’s fishing is catch-and-release and he believes about 95 percent of all fly fishers do the same. He has not killed a fish since 1993.

Over the next two hours I fish in three different spots.  I lose one rig of flies to a tree, which I later get back by casting into the tree again. Jarrett takes care of all this annoying stuff and really all of the thinking, deciding where I should cast and which flies to use when.

There’s a lot of excitement when the indicator moves and lots of bites that I don’t get set. I do catch about eight more rainbows ranging in size, the biggest at least 16 inches. They are beautiful fish with pink stripes and brown to green to yellow speckled bodies. With every fish I catch there’s another lesson to learn. The males’ jaw bones extend past the eye sockets. State-stocked fish are missing a fin. Native born fish are brighter in color and just prettier.

We break for lunch and I realize I’m cold. There’s a tremor in my hand and my toes are numb. We cross the river again and hike up the hill for lunch – local salsa, chips and turkey sandwiches. Beer if you want. Slightly warmed and revived, it’s back to the river for another hour of fishing.

Jarrett takes me to a new spot, facing the cliff face. It’s a deep pool with a gentle current. Jarrett calls the fish that live here snooty, but we’ll give it a try. I immediately land a small one. Then a beautiful 18-incher. Then comes the big fish Jarrett calls Hilda.

The red indicator wobbles. I strip the line and set the hook, and there’s something different about this time. Something that definitely feels bigger. I continue to strip the line to bring her close, but she’s got strength and fight and I don’t want to lose her. I release my thumb’s hold on the line and let her swim out.

“This is a really big fish, don’t feel bad if she gets away,” Jarrett calls out.

Strip the line. Let her run. Back and forth, in and out, I fight her. Five minutes go by. Jarrett is in the water working to get as close to her as he can as I work to bring her closer. She is just out of reach of the net but close enough to get a great look at. She’s beautiful. And big. I want this fish.

My bicep hurts as I hold the rod straight up and work to keep her hooked. I move her in close and she breaks the water with a jump and a twist of her body. Let her run. Ten minutes into this fight and she has no intention of surrendering peacefully.

I’ve stripped her in close, but not enough and she’s still fighting hard after 15 minutes. I release the line and she’s heading toward the next riffle in the water, just beyond the deep pool we’re fishing. It’s becoming routine now, but I keep hoping the next pass will be the last. Suddenly, the life on the line is gone.

There is no sharp movement or sudden jerk, just slack. She’s gone. I am instantly deflated. I bring in the line. From the point where it has been broken, Jarrett suspects that it was wrapped around her jaw and that her tiny, sharp teeth finally broke it. I learn what Jarrett calls the true sounds of fly fishing: four-letter words said through clenched teeth.

I shake it off and say things like, “It just wasn’t her day to be caught.” But, darn, I wanted to land that big fish. I may have caught one more after that in a new spot up river, but I can’t really remember. Losing that fish was the end of the day for me.

With the help of an experienced guide with all the gear and the knowledge I needed, my New Mexico fly fishing excursion will go down as one of my favorite adventures. It was beautiful. Not a golden-haze, poetic kind of beautiful, but a sparkling-water, wonder-at-nature’s-creatures, emotional kind of beautiful. It was real.

“Catching a little one or losing a big one, it’s just so much fun,” Jarrett says. He’s right.

Melissa W. Sais, usually more a fisher than a catcher, has dropped salmon eggs and spinners into New Mexico rivers and lakes since she was a child. She’s inspired to stick with flies. Her 10-year-old son tricked his first trout last summer on Coyote Creek near Mora.

Known for: lots of trout in a remote, high-country stream

Known for: fishing terrain ranging from boulders and pocket water, to sheer canyon walls to high meadows all in one day

Known for: world-famous rainbow trout as long as your arm and crowds